Hydroxyl Gas will Sanitize the Air

We've known for some time that UVC light is effective against bacteria and viruses. We also know that equipment utilizing UVC, along with HEPA filtration, to be a capable option.

What is novel for many, outside the medical profession is that hydroxyl technology is successfully being used to sanitize the air, while safe for occupants. The expertise was initially developed by NASA for the international Space Station. https://earthobservatory.nasa.gov/images/144358/detergent-like-molecule-recycles-itself-in-atmosphere

The hydroxyl (OH) radical—a molecule made up of one hydrogen atom and one oxygen atom with a free (unpaired) electron—is one of the most reactive gases in the atmosphere. It acts like a detergent in the air, breaking down other gases. In particular, OH is the main check on the concentration of methane, a potent greenhouse gas that is second only to carbon dioxide in contributing to global warming. The equipment developed by ClearZone uses photocatalytic oxidation to create hydroxyl at concentrations of 2 million parts per cm³ - without the use of ozone. Photocatalytic oxidation occurs when UV light, interacting with catalysts, humidity & ambient oxygen create charged particles that attack pathogens.

The CDC states that ultraviolet irradiation of air is an effective means of "reducing the transmission of airborne bacterial and viral infections in hospitals". - Ultraviolet germicidal irradiation (UVGI) occurs when UV light at an effective wavelength, disrupts the nucleic acid in the DNA of a microorganism, preventing it from replicating.

Hydroxyls are generated in nature at average concentrations of 2 million parts/ cm³ during the daytime. Hydroxyls make air safe to breathe by decomposing natural and man-made pollutants and killing microorganisms. They sanitize air and surfaces by a natural process called lysing, where the hydroxyls react chemically with the lipids, protein carbohydrates and other organic chemicals in the cell wall and membranes of bacteria, viruses and other pathogens and disrupt their structure. The interior contents of the cells leak, and the organism is destroyed. The mechanism for killing microorganisms is not biological, so the bacteria or viruses cannot develop any form of immunity.

The FDA recently approved a hydroxyl generating product for use in medical facilities, demonstrating the reduction of airborne microorganisms during continuous use.

The development of active hydroxyl air treatment systems for the purpose of cleaning the air in small, confined spaces was recently developed and fine-tuned by through our HydroClear Technology. HydroClear is like active air duct treatment and large portable units for disinfecting larger spaces. These systems can be safely used in occupied spaces 24/7/365 where pathogens are generated and circulated.

Please Contact US to receive a White Paper that show the effectiveness of hydroxyls, as used in ClearZone’s HydroClear Technology 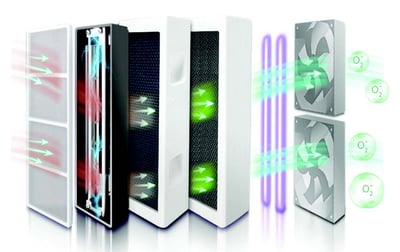 The BREEZE is our Hydroxyl Generator ideal for spaces up to 160 sq. ft. These are ideal for use in elevators, cubicles, ambulances, patient recovery areas and much more...

Copyright 2022 Chemex Industries, Inc.  All Rights Reserved On All Content.